How messaging apps change the way we communicate

How messaging apps change the way we communicate

From WhatsApp to Viber, multi-country survey reveals how messaging apps are changing the way we communicate

Rotterdam 26th October 2016: Findings from a new multi-country study of over 4,000 smartphone users across the UK, US, France and The Netherlands reveal how messenger apps are used and viewed by consumers today.

“Messaging apps such as WhatsApp and Facebook Messenger, Skype and iMessage, have become extremely popular with consumers. Our survey uncovers everything from their impact on calling and texting to security concerns, attitudes to advertising and propensity to recommend” says Michelle de Montigny, Global SVP Consultancy at MetrixLab. 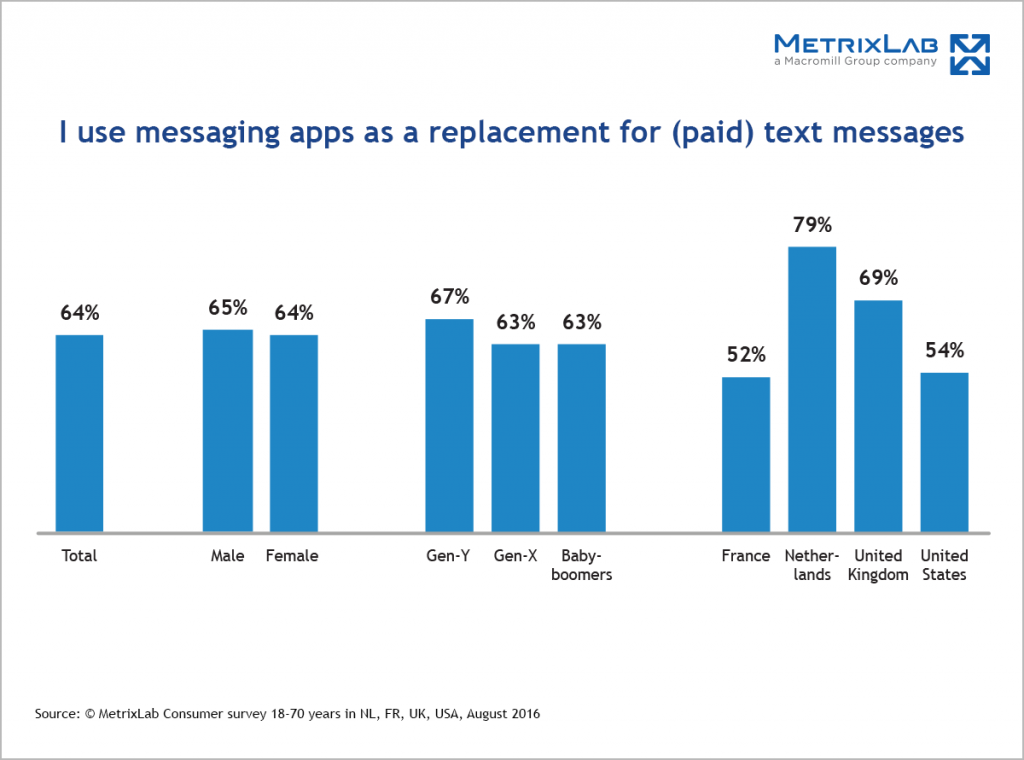 2.  The top five apps
Facebook Messenger is the most installed app at 63%, closely followed by WhatsApp at 61%. At 39%, Skype is in third place, iMessage in fourth at 27% and Snapchat next at 18%. A plethora of other smaller brands have so far failed to make much impact.

4.  It’s early days
Eight in ten consumers have heard of WhatsApp, but less than half (47%) feel that they know the brand “really well”. At 42%, it’s the same story for Facebook Messenger. Younger consumers are more likely to have developed a greater level of familiarity – 58% of Generation Y say they know WhatsApp “really well” while 54% say the same of Facebook Messenger.

5.  Skype is the only brand to achieve universal appeal
Around one third of consumers would consider using Skype (Generation Y 32%, Baby Boomers 29%, Generation X 27%).

7.  With an installation rate of 98%, almost all consumers in the Netherlands have WhatsApp on their smartphones

9. Users are worried about the security of their personal data
There is real unease around the security of all apps – including big name brands. When we asked respondents familiar with WhatsApp, less than half (48%) said that they thought their personal data was secure with the brand, while 37% agreed for Facebook Messenger. With just 26% agreeing that their data is secure with the app, Snapchat is currently perceived by consumers as the least secure app.

“Our international study throws new light on how smartphone users of all ages are communicating via messaging apps today. And while Facebook Messenger takes the top spot for installed apps, WhatsApp wins the most daily users. We’ve also seen that personal data security is still a worrying issue for consumers, highlighting the need for brands to instill more confidence in customers who use these apps or risk being overtaken by the next messaging trends” concludes de Montigny.

MetrixLab defines consumers by age group as follows:
“Baby Boomer” (Post 1945) – A person born in the years following the Second World War. These people are now senior citizens aged 65-75ish.
“Generation X” (early 60s-early 80s) – The generation born after that of the baby boomers (roughly from the early 1960s to mid-1970s). These people are now 40-50.
“Generation Y” – also known as “Millennials” – The generation born in the 1980s to late 1990s. They reached young adulthood in the early 21st century/”noughties”.
“Generation Z” – Born 2000 onwards, the generation following the Millennials who are tweens or young teenagers now.